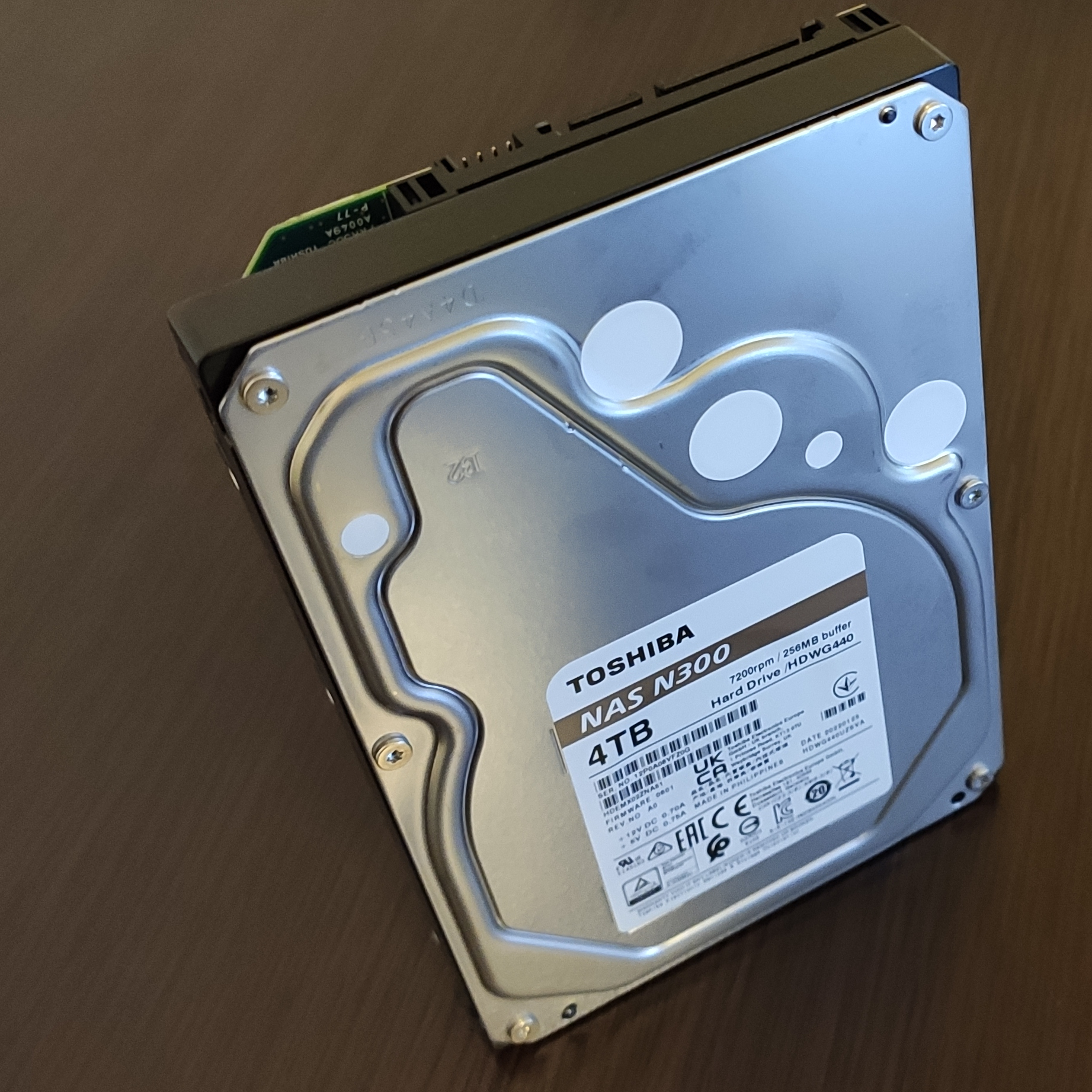 We recently got on our hands a Toshiba N300 4TB internal HDD with 256 MB of cache memory. We got supplied 4 of these HDDs in order to operate them on a brand new Synology DS1621+ NAS. Without spending any time we opened the box and we installed the new hard drive to our PC in order to benchmark it and measure its performance.

This drive is optimized by Toshiba for NAS use and it is certified for 24 hour x 7 days the week operation. Strangely enough, as a NAS drive it has rotational speed of 7200 RPMs, something that you don’t usually see in the most common NAS HDDs unless they are the Pro versions. An example is the Seagate Ironwolf that runs at 5900 RPMs unless you have the Ironwolf Pro model that runs at 7200 RPM. The same can be seen with Western Digital where their Red Plus model is at 5400 RPMs but when you go for the WD Red Pro edition you get a 7200 RPMs HDD. Just from that analogy, we can easily understand that the Toshiba 4TB N300 HDD is intended to be on the more professional grade category of HDDs.

As a NAS hard drive it is optimized for reliability featuring a 1 million hours mean time between failures (MTBF) and it also has endurance with workloads of up to 180 TB per year in a 24/7 operation environment. Toshiba has also attached to the drive various sensors that detect even the slightest shock and as such their advanced control and sensing technology in coordination with the built-in Rotational Vibration (RV) sensor, dampens all the vibration wear and tear on the HD. The vibration compensation of the RV ensures high reliability and the longevity of the HDD.

The hard drive we review has a massive 256MB of cache memory for buffering. This amount of buffer memory along with the 7200 RPMs boosts the N300’s performance to the maximum. In fact, it is so high performing HDD that if Toshiba hadn’t announced that this is a NAS hard disk drive, we would thing that it is a desktop one.

In order to see if the HDD delivers the promising results we tested it with 2 different benchmarking applications (HD Tune & CrystalDiskMark) and we also done a real copy test. The tests have been done in the following computer:

We used version 5.75 of the HD Tune and it was the first shock for us. Running the sequential read speed along the whole HDD revealed that we have to do with a serious performer. Starting at a maximum sequential read speed of 237.2 MB/s and finishing the test with a minimum of 109.6 MB/s transfer rate (averaging a 184.7 MB/s) is not something that you can avoid looking at. The burst rate was 252.6 MB/s and the average access time was at 13 milliseconds.

The write transfer rates were also consistent with what we were expecting. It gave an average of 183.3 MB/s transfer rate speed with a maximum of 236.5 MB/s and a minimum of 80.3 MB/s. Here we must say that the minimum should be around 105 MB/s but the HDD had a small hitch a bit before finishing the test resulting with a minimum transfer rate speed of 80.3 MB/s. We didn’t run the write test for a second time but we believe that this hitch might not be because of the HDD but it might be of other reasons. The access time during the write test was at 2.58 ms average.

Then, we continued doing a file benchmark test with two different file sizes for testing. We started the test with a 500 MB file size. The test indicated a consistent 230 MB/s sequential read speed and 235 MB/s of write speed. With a maximum of read & write IOPS of 438 and 564 respectively. The maximum read and write speeds are achieved with block sizes of 64 KB or larger.

Doing the same file benchmark test with a 2 GB file size revealed almost the same read and write speeds and a tiny drop in the Input Output operations Per Second (IOPS). Yes, we know… it is not like SSDs that can offer 600000 IOPS and even a 1 million IOPS but for mechanical HDDs, even this small 500 IOPS is quite large.

We then proceeded doing some more extensive read random access tests. We are obligated to say that HDDs do not offer such tiny access times as their solid state equivalents. The mechanical parts that the hard drives have generate a much larger latency in accessing data as the drive head has to move on the disk compared to their newest SSD brothers that they do not have any moving parts. As such, we should not expect in any way to see sub-millisecond or microsecond access speeds that we are used to see on the SSDs.

We ended the HD Tune tests by doing some extra I/O and transfer rate tests. The results that we got (with a maximum of 4000 IOPS) indicate that this NAS HDD is a top performer.

The tests with the 32 GB test size have sawn almost the same consistent results with the HD Tune tests with a maximum of 241 MB/s read and 236 MB/s write speeds respectively. The random 4K reads and writes are in line with a lot of HDDs in the market.

The benchmark with test size of 8 GB didn’t reveal anything extra. We get the same sequential speeds and very tiny increases in the Random 4K speeds.

We can see that we get the same sequential read and write results with the 1 GB test size benchmark. In that benchmark we can observe that the random 4K reads/writes are slightly increased compared to the previous ones.

The final benchmark with the 128 MB test size reveals the power of the large buffer size of the HDD. The hard drive we use has a 256 MB buffer size and as such it can fit all the test file inside its buffer memory. This results in slightly increased sequential read performance and also quite large increase in the random 4K one.

It is nice to run various benchmark applications in order to get a taste of the performance of an HDD. Unfortunately, all these applications are not enough to indicate the performance benefits in any real life scenarios. As such, we couldn’t end our review without doing any real copy operation.

In the first case we tried to copy a 30 GB image file from the Crucial SSD we had to the Toshiba N300. The N300 in that case shows off plenty of performance. It succeeded copying the whole 30 GB file in less than 133 seconds indicating a sequential write speed of around 231 MB per second. In the picture below we can see that at almost 80% of the duration of the test, the Windows copy operation had locked at around 224 MB/s write speed. Obviously, the first 20 seconds of the test, the write speed seemed to be much greater (even 500 MB/s) but this was due to the Windows caching mechanism and it is not at any case an indication of the performance of the N300.

In a second test we had, we tried to copy around 3000 files of various file sizes. Again, the performance of the N300 was amazing even though it had to copy some very small files (less than 1 KB) resulting in a significant drop in performance. Again, we succeeded achieving an average of around 180 MB/s write speed.

Hard disk drive temperature plays a major role when the drive is getting installed on a network attached storage (NAS) system where it operates on a 24/7 basis. Especially packing 4, 6 or more HDDs in very close proximity between each other in a NAS could result in potential problems if the heat generated by the HDDs is significantly large.

For this reason, during the whole duration of the benchmark, we ensured to constantly monitor the temperature of the HDD. Even though the N300 was not installed on a system tray and no fan were blowing to it we didn’t see any considerable temperature rise during testing. The maximum temperature we could observed was around 34.5 °C (around 94.1 degrees Fahrenheit).

We don’t have any professional grade equipment in our labs to measure the noise levels generated by the HDD. People complain that this series of Toshiba HDDs (especially the N300) is quite noise. At least our elderly ears couldn’t notice any substantial difference. There was the classical clicking noise by the hard drive head but this is common to all HDDs. It seemed that it was slightly louder than other HDDs of the market. We also installed 4 of these N300s to a Synology NAS and stress testing them we observed that this clicking noise was slightly louder but again I must say that we are used to such noises.

We also tried to use a mobile application to measure the noise levels of the Toshiba. The application was displaying a peak at 102 Hz. At start we thought that it was the noise from the spinning of the disks which in our ears was unnoticeable. After some extra investigation and after removing the N300 from the computer we observed that we still had this noise peak at the 102 Hz on the app. After digging around we ended to the conclusion that this noise was because of the motherboards chipset fan. In other words, it is likely that the noise produced by the CPU or GPU or the power supply unit of the computer is louder than the noise of the Toshiba N300.

The Toshiba N300 is a top performer in its category. We bought the hard drive at the Toshiba’s store Amazon.de page. The retail price (excluding VAT) was at €86.03 which is around $93,07 (US) at the time writing the article. Seagate was selling its IronWolf 4TB edition at €88.23 ($95.45) and the Western Digital Red 4TB was selling at €79.74 ($86.27). The Toshiba N300 price sits between the IronWolf and the WD Red one. With such a great performance, the only thing that remain to be seen is if the HDD will deliver the promise of the data reliability and longevity in time.

In a next post, we will review the Synology DiskStation DS1621+ NAS where we will install 4 Toshibas N300 HDDs in it. The N300s seem to be shining in such system. We will see the real life performance of the N300s in a NAS, a system where they intend to be installed. 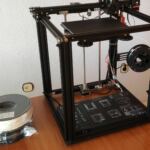 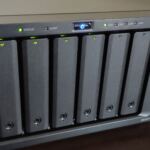