Are you bored of constantly losing your charging cables? Perhaps the clutter on top of your table is annoying you? If that is the case, then it is time to buy a wireless charging pad.

Wireless chargers not only help you cut the cable clutter but also they are harder and don’t break as easily as the simple charging cables. Of course, there are special magnetic charging cables that can help in some cases but they are not the same as having a wireless charging pad.

The idea is simple. You sit in front of your desk, you drop your phone on top of a charging pad and the juice starts flowing to your phone. There is no need to connect cables and such. Their cost is not prohibitive and as such you should consider buying one if your Android phone or iPhone device supports it.

In Wireless charging systems there are two coils that generate a magnetic field. One of the coils is located inside the charging pad and the other inside the mobile device. Using these two coils, a transfer of power is occurring from one device to another via air due to the magnetic field.

This kind of charging has the drawback that both the transmitter and the receiver must be in a close distance. The more far away they are, the less capable the system is, meaning that there is much less transfer of electricity from the transmitter to the receiver. The best would be that the distance should be less than 5 to 6 mm in order to transfer electricity efficiently.

This type of wireless charging is a bit more complicated than inductive charging. It has the ability to transfer electricity between coils that are further away. As such, they don’t need to be close to each. Both coils, the transmitter & the receiver should have the same resonant frequency. One of the drawbacks is that the transfer of electricity between the source and the target is much less efficient.

Bellow, we have a selection of wireless charging pads we found and they are worthy of considering buying.

The Belkin wireless charger is one of the best wireless chargers in the market. It is capable of charging devices at up to 10W. You can use it to charge your phone in any orientation you want (portrait or landscape). As such, you can watch a movie, browse or even play games while your phone is charging.

It is universally compatible with all Qi-enabled smartphones. It can wirelessly charge iPhones at 7.5 W, Samsung Galaxy phones at 9W and the rest phones with wireless charging capabilities at 10W.

The device is coming in four different color finishes. You can find it at $48.99.

For us, the TOZO W1 is one of the most stylish wireless chargers on the market. It is made from CNC (Computer Numerical Control) processed aluminum which is of aviation grade. Due to its aluminum construction, it is significantly tougher and more durable than any other plastic charger in the market. It is so thin that it barely is 0.2 inches (5mm) thick. It has a diameter of 3.94 inches (10cm) and comes in a plethora of color options.

Like a lot of other chargers in the market it is equipped with intelligent foreign object detection mechanism that will stop it charging if other metallic objects are placed inside its wireless charging zone. Its over-heating, over-charging and short-circuit protection provides a safe environment for your phones while charging.

Unfortunately, that device has also two small drawbacks. The first is that although it includes a USB Type-C charging cord, it doesn’t come with a power adapter and as such you will have to provide one of your own. The second one is that because the phone is laying flat on the pad it is difficult to work with it compared with the charging stands.

Not so stylish as we expected
Slightly bulky

The QTlier Wireless Charging station has everything you want. It is a 3 in 1 charging station meaning that it not only charges your iPhone but it can also charge your Apple Watch and your AirPods at the same time.

Its foldable and adjustable design allows you to not only fold it and carry it around in order to use it on your phone, office or travel but it also allows you to adjust the angle of support for your phone according to your needs.

It allows both horizontal and vertical charging orientation and as such you can view your favorite movies while charging your phone. It also has a wide soft LED night light so that you can see it in the dark without turning the regular light on.

The charger is also equipped with Silicone mats that prevent the phone from sliding down. It also comes with over-voltage and over-current protection and FOD (Foreign Object Detection) circuit. As with the rest of the chargers that support iPhones, Samsung Galaxy phones and other Qi-supported devices it also supports AirPods and iWatches. 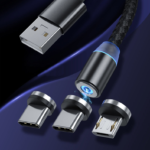 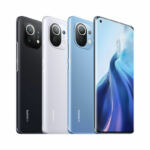